Recently I had the pleasure of finishing three books about four amazing women who collectively make up a huge chunk of aviation history—Sheila Scott, Jackie Cochran, Jerrie Cobb, and Jerrie Mock. All four of these women lived, flew, and accomplished during the same time period as Joan Merriam Smith. The three books I read include:

Not unlike today, the 1960’s was a period characterized by accelerated change, while at the same time an era filled with promise. Despite the noise and distractions of the day (civil rights marches, JFK’s assassination, the space race, Vietnam, the pervasive threat of nuclear war), rather than becoming too caught up in the drama, these women were instead collectively busy blazing trails, exploring new arenas, living lives filled with adventure and purpose, and generally creating the future that they wanted to live in. For these reasons and more, each of these books offers a real depth of discovery, a reflection about challenges, and a re-imagination of possibilities in times of deep change. In short, they’re simply inspiring.

One of my favorite things about reading books in general is coming across new information, new connections, and new insights. While reading Fighting for Space, for example, I learned that Joan was one of the first few women to be secretly tested by the Lovelace Clinic for the Mercury 13 program! For those who are interested in learning more about the Mercury 13 program, Netflix recently put together a documentary about it. You can watch the trailer here:

While I had suspected that Joan must have been at least considered for this program aimed at getting the first woman up into space (since so few women met the criteria for being tested at the time), this was the first I was able to confirm it. Now if only I could find some more information about her experience there. But first, onto the book reviews!

Barefoot in the Sky by Sheila Scott

Even though I had heard of Sheila Scott and knew she was famous for not only becoming the third woman to fly around the world solo, but for completing a polar flight, as well as breaking over 100 flight records, I really didn’t know anything much about her. Though it took me awhile to actually sit down and read her book, once I cracked it open I simply couldn’t stop! I was surprised to find that her book was extremely poetic, very introspective, and filled with vivid details. This made the experience of reading the book almost as pleasurable and realistic as if you were on the journey together with Sheila herself.

As an actress who originally took a flying lesson on a dare, Sheila soon found flying as her calling and went on to commit to a life of flying and achieving impressive feats. From the book’s epilogue, a particular statement jumped out at me. While reflecting on her experiences after many years of flying, Sheila wrote:

“But why did I have to fly to find happiness? I think it is because in the sky I am able to stretch my brain rather than my legs, and find motivation to satisfy my insatiable curiosity to experience things myself, to be able to understand them, and to find meaning and a sense of man’s superconscious. I must fly over every horizon to see what it is like on the other side!

Flying also gives me a spirit of adventure—which I believe is a necessary thing for future progress, both individually and internationally. Soon computers will install a great deal of knowledge into all men’s mental processes in a very short space of time, much quicker than the old fourteen to eighteen years of present-day scholastic learning periods. But unless man has individuality and some responsibility for his own actions, he will become as a computer himself.”

Sheila Scott, page 211 of Barefoot in the Sky

She goes on to say:

“Through my personal self-evolvement, my flights and what they are teaching me, I am meeting more and more people in other spheres of life who are thinking and striving as I am. Together our experiences may only be particles toward renewed discoveries of the superconscious, but I believe these are of value to man’s higher development. Occasionally I want to switch on my personal autopilot and sit back, for modern life is increasingly automatic, but then I find I am bored, negative, and I become self-destructive. Fortunately, another unexpected idea soon arises and once I have put it into words, I am chasing again, thinking of nothing else until it is done. I must live for the idea totally, completely involved, and know that it is what I have been born for. It is always a flight path of the sky that I am following, but it is not an escape. It is a search, not for fame or riches, but for self and understanding.”

Sheila Scott, page 212 of Barefoot in the Sky

What a profound set of statements! In other words, Sheila’s passion for flying was really about pursuit and progress as much as the thrill of a challenge and the joy of adventure. Her experience is something really anyone can learn from. We could also all take a cue from her bravery, her interpretation of the times, the potential pitfalls, and her commitment to progress.

Another thing that stood out to me about Sheila’s book, among the others I have read in this category, is that she was highly intuitive. She connected very much to the world above the ground, appreciated all that it had to offer, respected the privilege of flying, acknowledged the constant threat of death, and took solace in the idea that she was contributing to the greater good. I would recommend this book to anyone who wants to better understand the ups and downs of taking on impressive challenges, or who enjoys philosophy or poetry.

Fighting for Space: Two Pilots and Their Historic Battle for Female Spaceflight by Amy Shira Teitel

In Fighting for Space, Amy Shira Teitel dives into the story of Jackie Cochran and Jerrie Cobb, zeroing in on their unique plights to become the first woman in space. I was impressed with the level of research that the author completed, and her ability to synthesize that research into a captivating, well-structured, and engaging story that lines up with actual facts and events. I particularly appreciated how Amy addressed the nuances of both Jackie and Jerrie’s personal stories and varied recollections in her author’s note. The work that went into bridging the narratives of these two complex characters was by no means an easy task.

Prior to reading this book, I knew nothing about the details of Jackie’s personal life other than she was married to one of the the richest men in the United States, that she headed up the WASPs, and of course broke countless aviation records. This story brought so much more color to the complexity of Jackie’s life, which underscored the depth and nuance of her character. I particularly enjoyed the opening chapters which laid a beautiful groundwork for the book.

Here’s a particular excerpt I enjoyed about Jackie’s experience of breaking the sound barrier for the first time:

“For a brief moment, she felt how small she was in her little jet plane, and felt as though she were teetering precariously on the horizon close to the gates of heaven. For a moment she was entranced, but soon realized she wasn’t there to stargaze. Forcing her focus back into the cockpit, Jackie put the sabre into an S-dive. In an instant, she was losing altitude so fast that the needle on her altimeter was a blur …

Then, without warning, the turbulence stopped. The shock waves disappeared. The rattling was replaced by an unearthly silence. She was through the sound barrier; the turbulent air and shock waves were behind her and the noise couldn’t catch her. For a fleeting moment, Jackie felt a spiritual connection with something greater than herself. She didn’t feel scared just confident and keenly aware of the plane’s every moment.”

As mentioned in Fate on a Folded Wing, Jackie Cochran was both a friend and supporter of Joan’s, and for lack of a better descriptive word she was simply badass (according to one dictionary definition, that is to say “distinctively tough or powerful, or so exceptional as to be intimidating”). Because Jackie was concerned that Joan’s world flight didn’t receive the recognition it deserved, she wrote letters in support of her accomplishment to the National Aeronautical Association.

As for Jerrie Cobb, unbelievably I had never heard of Jerrie Cobb until I read this book. I appreciated the opportunity to learn about Jerrie’s life, how she came to head up the initiative of getting women into space (in an industry that worked against her at a time when women had so much progress yet to make). These times were messy, non-standard, emotional, unprecedented, littered with power plays, punctuated by valiant efforts, and filled with highs and lows. On top of everything, I was saddened to hear that Jerrie only passed away in 2019!

In short, without giving too much away, I would highly recommend this book to anyone who wants to better understand this period in history, or who enjoys a riveting, real-life story about two dynamic and complex characters who played a glorious role in history’s unfolding.

The Jerrie Mock Story: The First Woman to Fly Solo around the World by Nancy Roe Pimm

While I have read Three-Eight Charlie, originally published in 1970, I also wanted to read Nancy Roe Pimm’s book The Jerrie Mock Story for additional perspective. Since Jerrie flew around the world solo the same year as Joan, it never gets old hearing additional details about the experiences of women pilots in the 1960’s. While this book was written for a young adult audience, it’s actually perfect for adults! The story is well-laid out, easy to follow, and filled with excellent details. The author provides a thorough overview of Jerrie’s life, her personal experiences, the events leading up to her great accomplishment, as well as the adventure of her world flight. From the book, I enjoyed this particular description, as well as many others from Jerrie’s experience of traveling around the globe:

“During her final approach, ‘the last rays of the sun broke through the cumuli and bathed the little seacoast town with its golden radiance. It was an eerie light that often comes after a storm. The white ships in the harbor, the shiny rooftops, and the emerald palms shimmered against the backdrop of a deep purple sky. The rain-swept runway was like a golden finger.’

In short, Jerrie is truly an American legend, and her story is 100% worth exploring!

Even though each of these women lived in different locations (Ohio, England, Oklahoma, and two in Southern CA), because of the global nature and strategic importance of what they were involved in, they naturally had many of the same contacts, supporters, and industry connections in cities around the globe. That’s what makes reading all of these books together so entertaining. I hope you can set some time aside to enjoy them too and give these women some more of the credit they deserve by honoring their legacies!

View all posts by tiffanyannbrown

One thought on “A Tribute to Sheila Scott, Jackie Cochran, Jerrie Cobb, and Jerrie Mock” 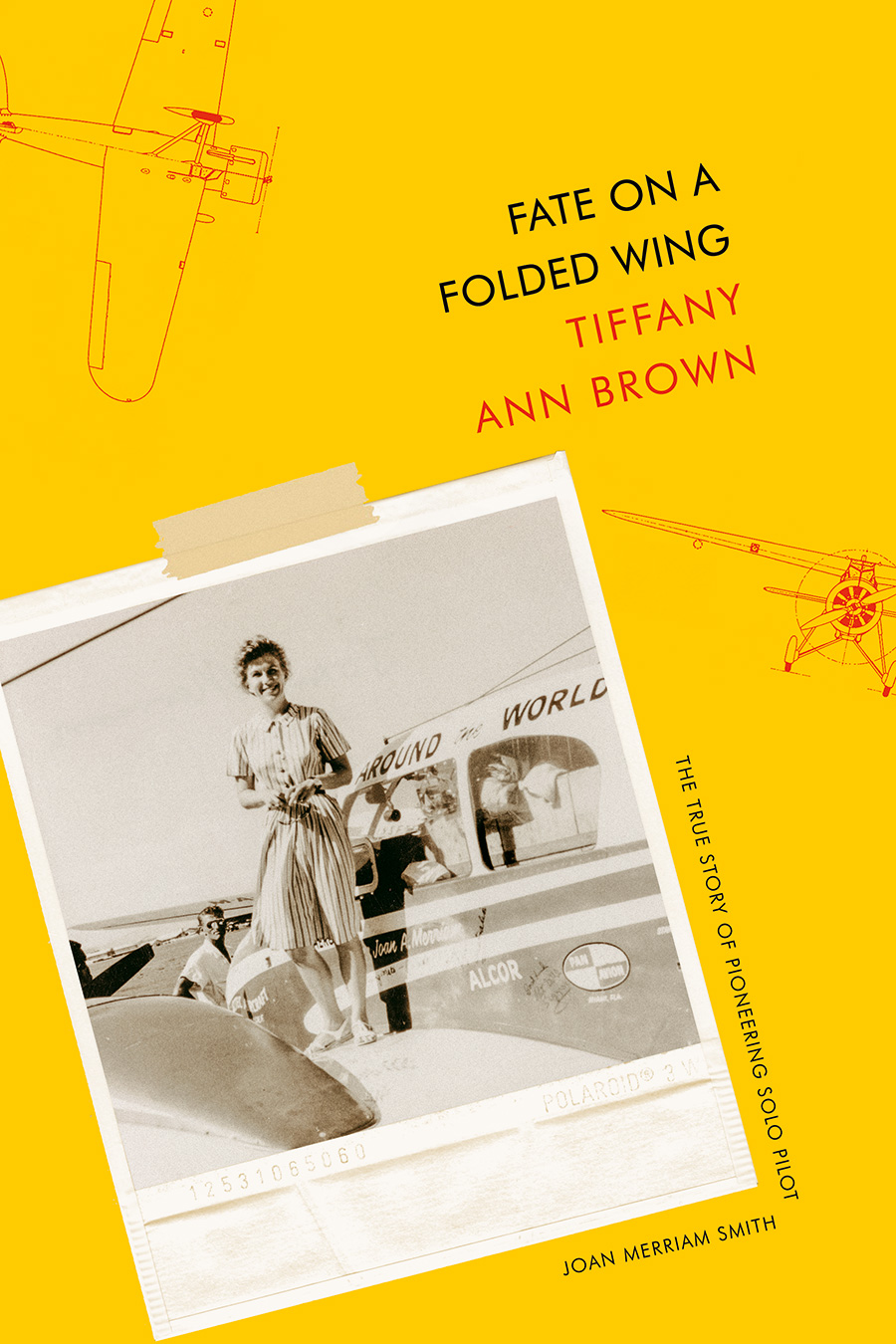