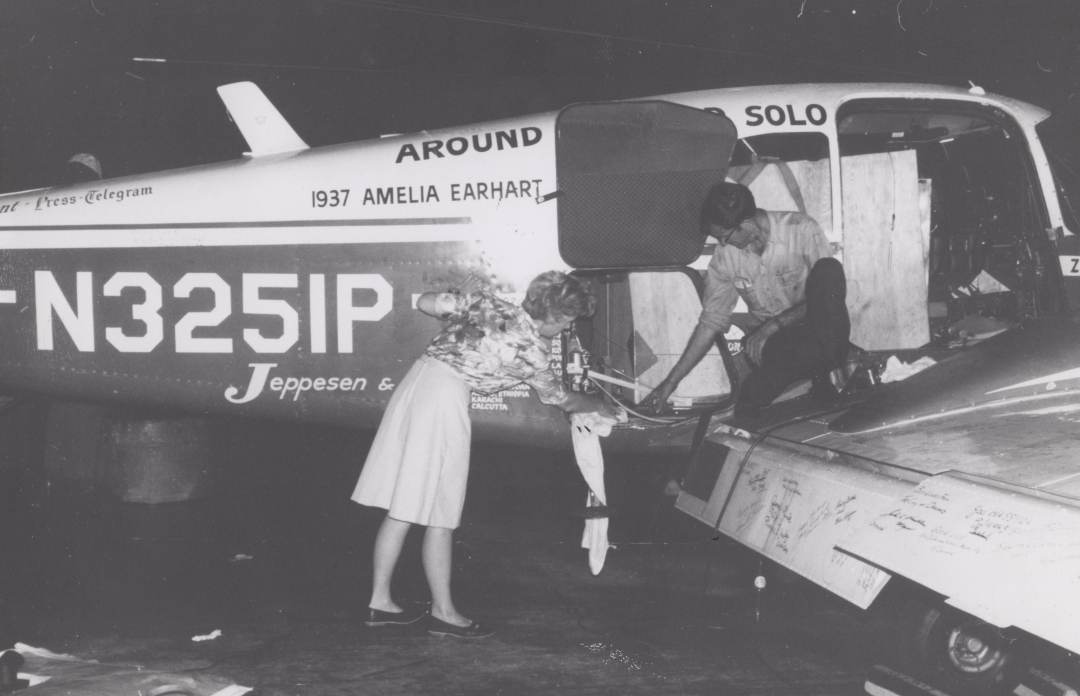 The first known female to complete a circumnavigation of the globe in a plane was a British pilot by the name of Mary Petre Bruce. After earning her pilot’s license on July 26, 1930, she embarked on her world flight on September 25, 1930 from the Heston Aerodome. Traveling through Eastern Europe, Syria, the Middle East, Thailand, China, and Japan, she would next have to fold up her plane’s wings in order to ship it across the Pacific. Arriving in Vancouver, she would next fly down the West Coast of the United States to Los Angeles and across the country to New York—where she would be arrested for flying circles around the Empire State Building—before boarding yet another shipping vessel to complete her journey back to London. To learn more about Bruce, read Queen of Speed: The Racy Life of Mary Petre Bruce.

In the same year that Bruce returned to London, twenty-four-year-old German pilot Elly Beinhorn set out to complete her trek around the world. Departing from Berlin in January 1931 in a Klemm KL-20 airplane, Beinhorn followed a western route. She, too, shipped her plane across the oceans, returning to Berlin in June 1931.

British pilot Sheila Scott would next go on to complete three separate flights around the world in 1966, 1969, and 1971. As an actress who had taken flying lessons on a dare, Scott set abundant records, becoming the first solo flier to cross the North Pole. She also set a new record for the longest solo flight ever made. To learn more about Sheila, read Barefoot in the Sky: An Autobiography Sheila Scott.

In 1980, British pilot Judith Chisholm set a record for becoming the fastest woman to fly solo around the world. Though out of print—if you can find it—check out the book Stardust: Judith Margaret Chisholm – A Memoir to learn more about Judith.

Moving on to the 21st century, American pilot Jennifer Murray became the first woman to solo the world—this time in a helicopter—in the year 2000.

British pilot Polly Vacher next flew around the world in 2001, and again in 2004, to raise money for the charity Flying Scholarships for the Disabled. To learn more about Polly, read her book Wings Around the World: The Exhilarating Story of one Woman’s Epic Flight from the North Pole to Antarctica.

In 2003, and again in 2011-12, CarolAnn Garratt completed solo flights to raise awareness for amytrophic lateral sclerosis (ALS). To learn more about CarolAnn, read her book Upon Silver Wings: Global Adventure in a Small Plane.

And most recently, in 2017, Afghan-American pilot Shaesta Waiz became the youngest woman to fly solo around the world in a single-engine plane with the goal of inspiring the next generation of STEM (science, technology, engineering, and mathematics) and aviation professionals. Check out her website at Dreams Soar.